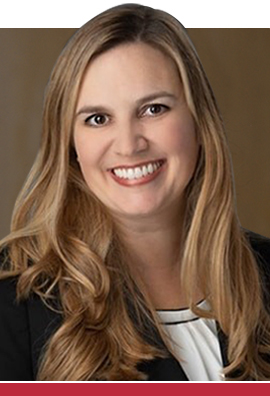 Erin Nations focuses her practice in the area of family law. She assists clients with divorce, child custody and support, and related matters.

Having grown up in Williamson County, Erin attended high school, college, and law school in Middle Tennessee. She graduated from Middle Tennessee State University Magna Cum Laude, receiving a degree in Political Science with a double minor in Criminal Justice and Pre-Law. After graduation, she attended the Nashville School of Law, where she earned her Doctorate of Juris Prudence. While a law student, she clerked full-time for the Circuit Court Judges of Williamson County. It was during her tenure as a law clerk that she formed the relationships and gained the vital experience that have shaped her into the well-known and respected attorney that she is today.

After obtaining her license to practice law, Erin Nations went to work at a private law firm where she gained valuable experience working with several seasoned attorneys. Her work as a law clerk for the Williamson County Circuit Court Judges paid off as Ms. Nations built her practice on her experience and reputation.

In 2014, Erin Nations joined forces with two former Williamson County judges, Ernie Williams and Robbie Beal, to form a new firm. Ms. Nations has continued to distinguish herself as a top quality Williamson County attorney, winning awards and participating in many community events and activities.

In 2018, Erin was elected to a four-year term on the Williamson County Commission, serving the constituents of District 6 in Brentwood.

She offered to look over my divorce/custody papers before I signed them. She was honest about all mistakes and explained everything in detail so that I wouldn’t be confused. She... read more

I met with several attorneys before meeting with Erin. I knew after our first meeting that she was going to be the right lawyer for me. I was so afraid... read more

I can’t say enough about how wonderful Erin was. She really went above and beyond to take care of me during the hardest time of my life. In addition to... read more

Fierce is the first word that pops into my mind when thinking of my experience with Erin Nations as my lawyer. She acted swiftly when it came to dealing with... read more